Published in the Financial Times 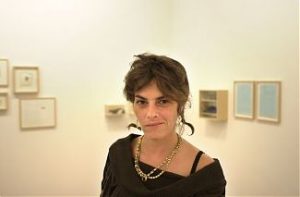 Tracey Emin is running late, so there’s time to snooparound her studio – several large white rooms based, predictably, in a street off Brick Lane, theself-consciously groovy area of East London.

An initial glance merely reveals lots of work in progress: a piece of cloth with the letters “UGLY BITCH” sewn onto it; a large print featuring a woman bending over, revealing her naughty bits. All very modern, very shocking and very Tracey Emin.

But a more careful inspection reveals some surprising lapses in hip-ness from the enfant terrible of Britart. First, there’s her CD collection – a startlingly middle-brow affair consisting of albums from The Jam, Oasis, and (gasp!) Tom Jones. Second, lying on a side table, there’s a copy of the May 2003 edition of Your Cat magazine.

Now we might expect Tracey Emin to read Wallpaper or Jockey Slut but Your Cat comes as a bit of a shock. “My portrait in that was done by Sam Taylor-Wood (the artist), actually,” says Emin as she suddenly appears in the studio, looking casual in jeans and a jumper, clutching a packet of fags in her hand and pouting slightly. “It was a big coup for Your Cat.” So Emin has a good excuse for the magazine – it features an interview with her and her cat, Docket. The piece details the story of how Docket went missing from Emin’s home, how Emin put up notices on lamp-posts asking for help, and how the notices were quickly torn down by locals who reckoned they were works of art and could be worth lots of money one day. “Docket was a bit put out that he wasn’t on the cover,” she says, flashing a lopsided grin and revealing her crooked lower teeth.

Emin tends to look unattractive in pictures but in the flesh she isn’t, to quote from her work in progress, such an “ugly bitch” – she is slim and looks at least a decade younger than her 40 years. This is Emin’s first set-piece interview in a while – over the past year she has done The Evening Standard, the Daily Mail and Your Cat, but by her loquacious standards this is almost no media at all. Why has she been so (relatively) quiet? “Last year I did lot of fings,” she says, sitting in front of the pot of tea prepared by her assistant. She speaks quietly, in a gentle Margate accent, and often pronounces the “th” sound as an “f”. “I did five big shows, free of them in museums, and wanted to scale it down this year. So this year I have done lots more travelling, lots more finking, and watched lots more crap TV.”

She’s also done lots more work in new fields – in addition to the small exhibition she currently has on at the Counter Gallery in East London, she has been designing a range of Tracey Emin luggage for Longchamp and has been making her first feature film. She is uncharacteristically coy about discussing the details of this movie, which is being financed by the BBC. It is, according to reports, about Emin’s favourite subject: herself. More specifically, it is, reportedly, about her traumatic teenage years in Margate, where she was raped at the age of 13 in an alleyway as she returned home from a disco. She reveals that it will be called Top Spot – after the disco that she went to as a teenager – but won’t give away anything else. “I want to keep it secret. Let’s just say I’ve never seen a film like it before in my life. It’s not going to be what people will expect.” She adds that the film is not going to be all about her – “it’s not a mini-me” – but as it is based in her home town and named after a disco she went to, it is hard to believe her. Besides, her work, from My Major Retrospective (1994), to Everybody I’ve Slept With 1963-1995, to My Bed (1998), is always about her. Through it, we have learnt about her rape, her energetic sexuality, her suicide attempt, her abortions. The question is: how much longer can the world bear listening to Emin bang on about her tortured youth?

“With novelists, their first book often is about themselves,” she says in her defence. “It’s really good to start with yourself and then move on.” But she has been a professional artist for more than a decade now and still hasn’t really moved on. “I think I will always use my stuff – me – but as I get older, it will become more mature.” Is Tracey Emin finally admitting that her work is immature? It seems so. But there’s a pause before she, in effect, retracts what she has just said. “Even if I wanted to get away from it, I couldn’t. I think I had such an interesting childhood, it is such a resource. I want to mine it.” This slipperiness is typical of Emin – even her respectable academic critics sometimes react with dismay to her incoherent statements on her art. As soon as they try to make an argument about her intentions, Emin contradicts it.

The inconsistency extends to other areas of her life. She recently said she was going to write a memoir – but now says she doesn’t want to. She also recently declared that she was going to have a baby by IVF (her on-off relationship with artist Mat Collishaw having ended) but that no longer appears to be on the cards. “If I get pregnant, it’ll be another nine months without sex,” she says, explaining the logic behind her change of mind. “Call me old-fashioned but I don’t want to have sex with someone when I have somebody else’s sperm inside me. Then I’ll have the rest of my life with a baby on my own. It’s really difficult. So getting pregnant is on ice. I’m being more realistic about it.” It seems that turning 40 recently has sent Tracey Emin into a bit of a tizz. “No!” she exclaims at the suggestion. “I was in a state of euphoria when I hit 40. I don’t look 40, or behave it, but I am and I’m happy. It’s just being single at 40 that’s a bit tricky.” Is there someone new on the horizon? “No.” Has no-one caught her eye at all? “Someone said to me the other day that I was pretty, and I said, ‘No I’m not, I’m sexy. There’s a big difference.’ I think men could find me reasonably desirable for a couple of nights but they would soon find they were out of their depth. That’s the problem. And anyway, I’m really busy, I have an amazing lifestyle, I have some very good loyal friends, and I’m financially independent.”

Emin often refers to her financial independence. Is money very important to her? “Money is really important,” she replies, without embarrassment. “Quite an interesting question from the FT.” Quite an interesting reply from an artist. “I employ people,” she adds, over-defensively. “I have outgoings, I pay a vast amount of tax. Why shouldn’t I get paid? I put my bit into society, I should get my bit back.” How rich is she then? “Er,” she mutters, hesitating for the only time during the interview, before answering a different question. “I think artists should be taxed less. How many artists pay 40 per cent tax? It’s a really rare thing. But you are penalised for your creativity, when you are actually giving something back. As an artist the majority of what you earn you put back into what you do.” So she’s quite Thatcherite in her economics? “No, I’m not!” she erupts. “I believe in the distribution of wealth and a meritocracy but not to the point of, you know, putting mental patients out on the streets and taking away free education for everybody.”

She wants to pay less tax and yet have better state services – it’s hard to think where that puts her politically. New Labour? “Fuck New Labour! Have you been to an NHS hospital lately? At the last election, I didn’t vote. I should have voted Green. The whole of politics in Britain needs to be really really shook up. But I’m an artist, I don’t know the first thing about politics.”

Some critics would argue that Emin doesn’t know the first thing about art either. One of those who said so recently was Philip Hensher. Emin, he wrote in The Independent, was a half-witted dullard with no inquiring intelligence. The piece set in train one of the strangest art world spats of the year, with Hensher suggesting in a subsequent piece in The Spectator that Emin was conducting a vendetta against him. He pointed the finger at her after his home was inundated with unwanted deliveries including incontinence pads and Peter Rabbits figurines, and implied there was a homophobic edge to it all, in that the items were addressed to Miss Phyllis Henshaw.

Emin, denying she was behind the deliveries, responded by threatening to sue him. She won: The Spectator recently published a grovelling apology to her. “I started taking legal proceedings because I knew I would win any case for libel,” she says, still sounding angry. “What he accused me of was outrageous – saying I was homophobic. I have a lot of gay friends so it was very hurtful. But I was very happy with the apology and having my legal costs paid.”

She looks hurt as she discusses the affair. Does she generally get upset by what the critics say about her work? “For every bad word that critics say about me, a hundred people go and look at my work,” she proclaims defiantly. “But it annoys me that for slagging me off over 1000 words, they get £700 with which to take their mistress for dinner, buy their wife a present and pay for their mortgage for a week. They should think more carefully how they earn a living. It’s slightly embarrassing.”

On that note, she suggests it might be an idea to show the FT her latest exhibition – at a gallery 10 minutes away. “I’ll show you my house and my car as we walk past!” she adds excitedly. As she leaves the studio, she explains that on top of this large space, which she has on a 10-year lease, she also owns a show-room, a house in East London and is building a house in Cyprus. Trotting along the streets of East London, she points out her favourite pub (The Golden Heart), her fabulous five-story town-house (“It was built in 1729, has original panelling and is opposite a grade 1 listed building!”) and her new Mini Cooper (“I wish I had more time to learn how to drive”). At the gallery she talks about her exhibition – a roomful of work entitled Menphis – enthusiastically. It consists of displays of personal memorabilia alongside prints, drawings and stories handwritten on lined A4 paper. They are all about one thing: Tracey Emin. Many of the stories are told surprisingly well. But for all the skill of their telling, you can’t help feeling that you’ve heard them before.