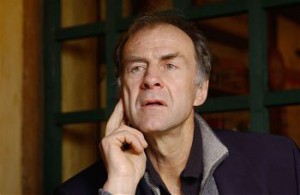 I’m halfway through telling Sir Ranulph Fiennes about my nightmarish journey from London to Exeter when it strikes me that the man who has, among other things, walked across the Antarctic continent unsupported, parachuted on to Norwegian ice caps, circumnavigated the globe via its polar axis, and run seven marathons over seven days on seven different continents (just months after heart surgery), probably doesn’t care that I had to haul my fat bum out of bed at 5am (five in the morning!) and drive through wintry showers (wintry showers!) in order to meet him on time. But being the charming English gentleman that he is, Fiennes nods along sympathetically.

“Sounds . . . er, just awful,” he says in a voice eerily similar to that of his distant cousin, actor Ralph Fiennes.

We are standing on the forecourt of a Shell garage just off junction 30 of the M5. Sir Ranulph, or Ran as he is known to his friends, had originally asked to meet at his farm in Somerset but changed arrangements at the last minute.

“I know a golf course nearby where we can take some photos and have a chat,” he says authoritatively.

Fabulous, I reply, imagining a clubhouse with comfy leather armchairs and roaring fires. But as we pull into the barren landscape of Northbrook Golf Course, it becomes clear that there is no posh clubhouse and that Fiennes is simply planning to conduct the interview in the car park. The photographer is horrified and scampers off to find somewhere more suitable.

In the meantime, we settle into the leather seats of Fiennes’ X-Type Jaguar, looking like two cops on a stakeout. At 6ft 1in, the 59-year-old explorer is cramped in the driver’s seat. I ask why he wanted to meet here, in a car park in an anonymous suburb of Exeter. “Well, my wife’s in a hospital nearby,” he replies, quietly. “She’s not very well. I’ve been in and out of hospitals with her for two months.” Hope it’s not serious. “I hope not. I prefer not to talk about it at the moment.”

I don’t pry further, but he tells me that Ginny, whom he married some 34 years ago, and met when he was 12 and she was nine, fell ill on the day he returned from his extraordinary series of marathons in November. Since then, he has been spending many nights at the hospital in a little room in the student nurse’s block – paying Pounds 13.50 a night for the privilege. It is terrible bad luck for this to happen so soon after his own heart attack, last summer. “But that’s life, I suppose,” he says awkwardly.

Fiennes is much more comfortable talking about his own health. His heart attack came as a surprise to everyone – his wife, the media, readers of his fitness book, Fit for Life, himself. He was boarding an EasyJet plane to Edinburgh when he collapsed and was taken to hospital to have emergency bypass surgery. He was unconscious for three days, during which time his heart kept stopping. “They had to jump-start me 11 times. They thought I could be brain damaged, but . . .” A smile. “I seem to be OK.”

He talks about what has changed since the surgery: he takes pills three times a day and has given up chocolate, red meat, gravy, butter and full-fat milk. But this, really, seems to be it. He is, largely, carrying on as before, doing a two-and-a-half-hour run every other day and participating in a race every two months or so. He is reluctant to talk about plans for future expeditions (on the grounds that it may encourage other people to get there first) but says he would like to climb Everest soon and would like to mount an expedition to discover a lost city in Oman, if he can raise the necessary Pounds 750,000 (he discovered the lost city of Ubar in Oman in 1992).

But is this level of physical activity entirely sensible? “Well, I’m trying to ignore the heart condition,” he replies. He taps his fingers on the steering wheel – or rather, what’s left of them, having lost the tips of his fingers and thumb on his left hand to frostbite during an expedition in 2000. “If someone had asked me five minutes before my heart attack if I felt fit, I would have said: ‘Of course I do.’ Anyway, I just basically ignore it.”

He insists that his cardiologist says it’s OK for him to do this, as long as he doesn’t let his heart beat at a rate of more than 130 beats a minute. But he also indicates he is making no real effort to keep his heart rate below this level. “I don’t think I went above 130 when doing the marathons because I wasn’t racing anyone, but now that I’ve gone back to racing against people, I’ll see what happens.”

I’m just about to ask him if he has a death-wish when the photographer returns, saying he has found a pub nearby where we can chat over coffee. It turns out to be no less surreal than the car – for some reason there is a nursery class being held in the lounge, so the rest of the interview is conducted with 20 kids singing “The Wheels on the Bus Go Round and Round” and others in the background.

And, worryingly, as we enter the pub, Sir Ranulph remarks that he “hates interviews”. “Unless they have a point of course. And the point of this is to promote my book.” I take the hint and we spend the next 15 minutes talking about his rather fabulous biography of Captain Scott, which came out a few months ago and which he is currently re-writing for the US market. In the book, Fiennes attempts to restore the reputation of the polar explorer, taking issue with Roland Huntford’s 1979 biography, which did for Scott what Celebrity Big Brother did for Vanessa Feltz.

“Somehow Huntford managed to make a fairly nondescript torpedo lieutenant at the turn of the century – whose father was a brewer – into a symbol of imperialistic Britain,” complains Fiennes. “That argument is simply not borne out by any evidence.” This is the one time during the interview when mild-mannered Fiennes sounds angry – he even says he wants Huntford to sue him so that he can present his arguments in court. Is this strength of feeling down to the fact that Captain Scott is such a hero to him? “Oh no, Scott isn’t a hero at all,” he remarks. “My father is my biggest hero.”

This may seem like an odd thing for Fiennes to say, as his father, Sir Ranulph Twisleton-Wykeham Fiennes (from whom Ran inherited his full name and title), died before he was born, during the second world war. But the shadow of his father has always loomed large over his life. Indeed, it was for many years Ranulph’s only ambition to go to Sandhurst and command the Royal Scots Greys, his father’s regiment.

For several reasons, including the fact that he didn’t pass his A-levels, he never realised this ambition. He was attached to the SAS and served in the Royal Scots Greys but left when he realised he would never become a regimental colonel. But despite all that he has achieved, Fiennes says he would trade it all in exchange for leading that regiment. “I would, definitely,” he says, sounding surprised that anyone would think otherwise.

He didn’t become a full-time explorer and writer as soon as he left the army at the age of 26 – he applied to be a spy, for several jobs in the City, and toyed with the idea of becoming an adventure-training instructor. It is almost impossible to work out what drives him to do the gruelling expeditions that he has become famous for because he refuses to be psychoanalysed. Dr Anthony Clare once said that attempting to plumb his psyche was like “trying to stir a void with a teaspoon” – a quote that Fiennes is delighted with. “The Special Forces train you very well on how not to be interrogated.”

What does he make of the theory that he does the reckless things he does in a subconscious effort to match the heroism of his father? “I suppose Freud would pick the dad-thing out – it’s the most obvious thing for psychologists to say.” What about the theory that it is a substitute for children? “I’ve never felt a need for kids, or for a replacement,” he says, frankly. “But my wife did, and so for 17 years we went to the normal IVF clinics. But the trouble was that they couldn’t find anything wrong with either of us. By the time we reached 40, we decided to leave it.

“Around that time she started to fall in love with Aberdeen Angus cows and started breeding them as a farmer. There are 75 of them now. They all have names and they are very cuddly.” He smiles. Does he cuddle them? “Not all of them, but the ones I like, yes.” Freud would, doubtless, have something to say about that. “I don’t analyse myself at all. I would say things just sort of happened in the way that things do in life, and that if I had A-levels, it wouldn’t have happened. It’s pretty simple.”

The comment is typical Fiennes: understated, unemotional, unromantic. Sometimes people interpret this manner as arrogance or egotism. But in the context of our touchy-feely society, I find Fiennes’ old-fashioned stiffness rather wonderful. And his cold front doesn’t necessarily mean he has a small emotional range. “If something very sad happens in my personal life, I’m going to react to it with grief in the same way as anyone else,” he explains. “But if I’m talking in public about something that really means something to me and I find that my voice is catching, I desperately try to fight it.”

Touchingly, when asked to cite what he is most proud of, he immediately mentions his marriage. “It might sound sort of corny, but it has been 34 years. It’s a good thing.” Before we leave, I prod him about the death-wish thing. Does he fear old age? “I really don’t want anything to do with the kind of old age where you feel old,” he replies. “I’d rather disappear.”

There is a bit of a silence, filled in suddenly by the loud sound of 20 kids breaking into a rendition of “Incy Wincy Spider”. So he doesn’t fear death at all? “I used to worry about it but since the heart attack, it has more or less gone. I just blanked out for three days and woke up in hospital. Well, that’s death isn’t it? It’s nothing. There was nothing unpleasant at all. Hopefully, if I have another heart attack, it will be similar.”