Published in The Times 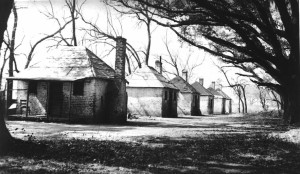 I arrived in New Orleans a week before the start of Mardi Gras, the annual carnival period associated with parades, balls, and, somewhat bizarrely for a pseudo-religious event, scenes of young women exposing their breasts in public. However, I didn’t hang around for any of the partying. Instead, after a grim night in a bleak airport hotel, I set off on a 500 mile round trip tour of former slave plantations across the Deep South.

It turns out it is. Apparently there were once nearly 50,000 plantations across the South, powered by a slave labour force which hit 4m at its height, and while most have gone, a few remain in the form of military barracks, prison farms, and, in some cases, tourist resorts. Moreover, the River Parishes Tourist Commission, “the official marketing organisation for New Orleans Plantation Country”, was reporting that 12 Years A Slave had boosted “numbers up across the board for all of our attractions” before it even triumphed at the Academy Awards, while, Felicity, one the four antebellum plantations where Steve McQueen made the film, recently began offering tours in response to the success of film.

What are these places like in the flesh? Well, the weirdness of my trip, organised through various local tourist boards, faded as I accepted it wasn’t all that different to visiting Anne Frank’s house or Nelson Mandela’s prison cell, but the Deep South in the winter is a bleak part of the world, with long boring straight roads across flat terrain, terrible food, hotel restaurants subjecting guests to classical versions of Coldplay tracks, and when you come from Britain the history can at times feel laughably thin. At some points I found myself touring houses the same age of my flat in London, and listening to comments like: “television didn’t exist in 1800”; and “the air conditioning vents are not historically accurate”.

Then, of course, there was the intensely depressing subject matter. Which turned out to be depressing in the opposite way I expected. You see, many of the “great historic houses” of the Deep South don’t do a great job of actually recounting their “great” history. My first stop, for instance, the Greek Revival Anchuca Mansion, in Vicksburg, Mississippi, may have once been home to Joseph Emory Davis, brother to Confederate President Jefferson Davis and notable planter and slave owner, it might be based in a county which on the eve of the Civil War, had a population which was two thirds enslaved, it may stand in a city which is now 60.4 percent African American, but none of the official materials I read, nor the video put on for me as a guest, mentioned the word “slave”.

In contrast, my second stop, the Monmouth Plantation 72 miles away in Natchez, Mississippi, acknowledged the existence of slaves in its official material, albeit in passing, but when I took a tour of the grand old house with 12 other (white) guests, the guide talked about how all the bricks for the house were made on site, without mentioning they were made by slaves on site, referred to the giftshop as originally being the “servants’ quarters”, when they were actually the slaves’ quarters, and it was only after the very end of the long talk, which covered the trials of the rich white owners during after and during the Civil War in extensive detail that the guide said embarrassedly: “They did have slaves”.

Though, even more startling than the casual omission of the whipping, executions, shackling, rape, mutilation, branding, burning and imprisonment that went into the building and running of these houses was the nostalgic aggrandisement of the Deep South’s history. It seems that Plantations are the closest thing the USA have to stately homes, and plantation tours mainly exist to give tourists a rose-tinted Gone With The Wind view of events, with Monmouth referring itself as a “romantic inn” on its website and hiring itself out for weddings, and all three houses I stayed at offering B&B accommodation so kitsch that it would have made even Liberace feel uncomfortable.

Indeed, although the definition of what makes a plantation is ambiguous, I wasn’t even sure my first two houses were technically plantation homes, given they were not based in cities, not on farms, though it says something about the idealised view of plantation life in America that they might want to be seen to be, and that my room at Monmouth was even called a “plantation suite”.

Frankly, it was all quite shocking and, with 12 Years A Slave still haunting me, a bit sickening. It also bothered me that all the guests and visitors were white, but after a while I concluded it was probably for the best: if African Americans knew that this was what white people considered fun, there might be riots. And when I was introduced to David Slay at the Vicksburg National Military Park, an expert in African American history, I found myself complaining that my trip felt the equivalent of touring the grand houses of former Nazis in Germany.

“That’s a bit over the top as an analogy,” he responded. “I would say slavery was a controlling institution, like the US Army, rather than a total institution, like a concentration camp.” He handed me a slide which showed that in 1860, only 37 free blacks were living and working in Vicksburg. “But you are right. People going to these houses do not go seeking the truth. They want to indulge in Old South nostalgia. They don’t want to know about the human cost. But one thing that 12 Years makes clear is that this system was held together by violence. And maybe the film will force this kind of tourism to change.”

It might do eventually but by day three, when I arrived at the Oak Alley Plantation Mansion in Vacherie, Louisiana, a short walk away from one of the locations for 12 Years, based on land now farmed by the man who at the beginning of the film is showing slaves how to harvest sugar cane, I’d had enough. And what I could see of Oak Alley, with guides dressed in nostalgic Civil War dress, filled me with dread. Dread which deepened when a white Southerner remarked, in the course of casual conversation: “People emphasise the negative side of slavery too much.”

However, the tour at Oak Alley was a revelation. The female guide, a former teacher, began by telling us that the house was 175 years old and that it was “completely built by slave labour – slaves made every brick on site”. She followed this up with an explanation of how the punkah worked in the dining room, and how it was a “slave’s onerous job to keep it going”. About the kitchen she said “the slaves would cook over an open fire in extreme heat”. She pointed out that the ticket booth was once a prison for slaves. And she ended her talk with a plea for guests to visit the permanent slavery exhibition on the grounds, housed in six reconstructed slave cabins. “120 slaves built this house. There would be no Oak Alley without the slaves.”

I went to the exhibition. The names of some of the slaves were written on the cabin walls, along with some accounts of their lives. And the shackles used for adults and children were presented next to implements used for harnessing farm animals – emphasising just how slaves were viewed by their owners. White historians have argued that scholarship has focused on plantation mansions and owners because there is more evidence about their lives. But Oak Alley is proof that you can find the slave stories if you make an effort.

A visit to the Laura Plantation three miles away the next day was also a sobering experience. They had photographs of former slaves, and the original slave cabins, which, I was told by Norman Marmillion, 67-year-old who restored the house, were homes to the descendants of slaves until the 1970s. He added that there was increasing interest in the real story behind the plantations – that tourism surveys suggested that 35 per cent of visitors wanted to hear about what life was really like, rather than just the “glory and grandeur of the South”.

Though, of course, 35% still isn’t very much. And there were still aspects of Laura and Oak Alley Planatations that made me uncomfortable. The slave cabins at Oak Alley were so new and well built that actually looked relatively pleasant to live in. There were some seriously politically incorrect items for sale in Laura Plantation’s gift shop, from black “folk dolls”, to “Big Mama’s Old Black Pot Book of Recipes”. And while Oak Alley is run by a non profit foundation, Laura is run as a business enterprise, and I felt uncomfortable with the idea of someone whose family ran plantations now making money from flogging the story of slavery.

I guess we Brits should be careful when accusing Americans of not facing up to their brutal history, when the fact is that British shipped more than 3m people from West Africa to the Americas, taking the lead in an Atlantic slave trade which, in turn, helped finance the construction of modern Britain. But the lack of frankness feels especially poignant in America, where race is such a live issue and where in the week I visited, one of the big news stories was rock guitarist Ted Nugent calling President Obama, in the language of the Plantation, a “sub human mongrel”.

And for me no one captured America’s dissonance on the issue better than Yolande Robbins, the 73 year old woman who runs the Jaqueline House Museum in Vicksburg. I was sent to see her by the local tourist board, and expected something rather grand. But it turned out to be just a small shabby house standing next to the funeral business her father set up during the depression. You can visit it only by appointment and the donated artefacts consisted of donated items like her mother’s silver, and the chair belonging to the first black lawyer to practice in Vicksburg.

To be honest, it was the most pathetic museum I have ever visited. But it was also the most affecting. For among the exhibits was a nine foot cotton sack, and putting it over my shoulder, it became clear just how hard slaves would have to work to fill it, and how cruel it was that they were often beaten for not doing so. She also showed me the handle of a whip that once belonged to Henry Cornelius Robbins, her Welsh grandfather, an overseer on a plantation. He ended up falling in love with a black woman, and explained, in part, her own mixed race heritage, but beating slaves was nevertheless part of his work.

“It was very difficult for me to discover this,” she said. “I was very active in the civil rights movement and my great grandmother Harriet was a slave. I remember she would sing me sea shanties.” She sang me one of the songs. After she finished, I told her how strange the houses I was visiting felt. She was not surprised. “There has been a great transformation on behalf of white people, but they think of the past without thinking there were people involved, their ancestors, to perpetrate it. They are genuinely horrified but they cannot personalise it or say sorry.”