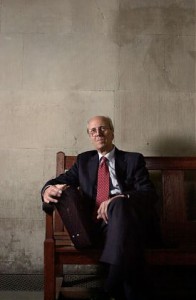 “Indian or Chinese?” barks Lord Tebbit, flashing his sharp teeth and offering me a seat in the House of Lords tea room. Horrified, I freeze in my tracks. I had suspected that Tebbit, once described by Tory mayoral candidate Steve Norris as “a racist and a homophobe”, occupied a backward, politically incorrect world that dismissed the majority of the human race who don’t have the good fortune to be born white, British and heterosexual.

But to be unable to tell whether I am of Indian or Chinese origin really does take the bloody biscuit. “Err, actually, I’m British …” I begin to splutter in reply. Lord Tebbit blinks back at me. He turns to the waitress looming above our table. “Indian tea rather than Chinese, thank you very much.” He turns back. “Would you like some cake?”

How mortifying. It’s possible that 72-year-old Tebbit has missed what I said – he is hard of hearing in one ear (“too much shooting”). But the terrible truth for me is that he is probably just being polite. Indeed, it transpires over the next hour that the bustard of the Old Right, once described by Michael Foot as a “semi house-trained polecat”, is pathologically polite – “a model of courtliness and restraint” as The Spectator magazine described him last year.

Declining the offer of cake (feel too sick), I hurl a barrage of questions at him in an attempt to distract him from my faux pas. In a very short time we cover subjects including: what he does in his typical day (he wakes up at 6:30 and likes to spend the day in his garden); what he does in his typical week (he spends two or three days at the Lords); his refusal to retire since standing down as an MP after the 1992 general election (“that’s a recipe for getting very old very quickly”); his view on the ousting of Iain Duncan Smith (“in the circumstances it was the right thing to do – you can’t have a party leader who can’t control Central Office”); his view on the move to crown Michael Howard Conservative leader (“I rate Howard quite highly… higher than IDS. He’ll deal with Blair and I think he can unite the party”).

In fact, we talk about almost everything except the things Tebbit is most associated with: race (he’s not a big fan of multiculturalism) and sexuality (he’s not a big fan of “the queers” either) and Europe. But in the end, the subjects are unavoidable. “I think Labour can lose the next election,” he begins. “They will lose seats widely – to the Lib Dems, to the Conservatives, and I fear they may lose seats to the British National party. They are much better-organised and much better-financed than they were.”

Much to the distress of successive Tory leaders desperately trying to modernise the party, Tebbit, proponent of the very famous and very silly “cricket test”, is always bringing up his controversial views on race in this manner. Why does he bang on about it so much? “I’m not particularly concerned with race,” he claims. He speaks calmly and carefully at all times, never becoming agitated. “I don’t think that race matters very much. I think what matters is culture. And in a curious way, I think that David Blunkett understands this. I think it’s because David is blind – he doesn’t know whether the chap talking to him is Asian or black or white, except for possibly by accent; all he knows is what the chap is saying. I am really in the same category.”

That’s a lovely sentiment, I insert. But it doesn’t really tally with his admission that he plays Spot the Brit whenever he’s on the Tube, does it? “Ha ha! Yes, indeed,” laughs the Chingford Skinhead. “Indeed. That’s because one is very conscious of what an enormous polyglot city London is.” He continues, rapidly moving away from the subject of Spot the Brit: “If you look around the world, multicultural societies are unhappy societies. Indonesia, the Philippines, Sri Lanka.” What about America? “America’s not multicultural – it’s multi-ethnic. I think multiculturalism is giving us great difficulties.”

Yes, I squeak, but aren’t there great benefits too? Doesn’t the incredible diversity of London, the fact that hundreds of languages are spoken in the city, excite him? “Not particularly,” he replies, sounding genuinely depressed. His old hands quiver as he picks up his cup of tea. “It doesn’t work if you are a teacher. It doesn’t work easily if you are an employer. And it worries me that you get ghetto walls being built.”

He makes a tenuous leap to the subject of crime: “I think what saddens me is that when I was 12 years old, it was perfectly safe for me to walk home through central London in the blackout – how many kids could do that now?” But surely there are thousands of reasons for London’s crime problems, most of which have nothing to do with multiculturalism? “There has been a great deterioration, and part of that deterioration is the disintegration of the community spirit,” he replies.

To me this smacks of blatant racism. And, if nothing else, it’s a joyless view of the world. I ask if he can think of just one good thing that may have come out of Britain’s vibrant multiculturalism. The introduction of chicken tikka masala, perhaps? He uhhms and ahhs and eventually remarks: “I can see some good things that could come out of it, such as a wider understanding of the world outside Britain, but I don’t think that’s coming.”

We switch to his second-favourite subject: “the gays”. Is it true that he believes homosexuals should be barred from becoming home secretary? “I think it would be dangerous. It would mean that somebody who has a clear minority interest at heart is legislating also for the 97/98 per cent who are not of that persuasion.” Would he object to a gay prime minister? “It would depend on whether he was what I call a gay pride prime minister, or whether he was a homosexual prime minister.”

So while he would object to a gay home secretary, no matter “how” gay they were, a gay prime minister would be fine provided they weren’t a raging queer? “Well, yes.” But surely a gay prime minister would have even more influence over policy that a gay home secretary? “Well, not in that specific department. I don’t think there’s a heterosexual and homosexual defence policy, or tax policy.” Actually, there are gay-related issues in both those areas, but the conversation is becoming ridiculous, so I move on.

Would Tebbit accept that he was homophobic? “No, no no. One of the best organisers in Conservative Central Office was homosexual – he was a great guy. I relied on him a great deal.” I resist the temptation to grab his knee and exclaim: “oo-er!” “I found nothing difficult about being his guest at dinner, because he wasn’t rushing around grabbing everybody by the … ” Bottom? ” … arm.” So it’s just the ones who go on about their sexuality that he objects to? “Yes, I do find them boring and ill-mannered.”

At times talking to Tebbit feels like having a pub conversation with Alf Garnett. Indeed, I’d normally find this kind of conversation intolerable. I’d scream or, more likely, leave in a huff. But, for some reason, the opinions seem less horrendous coming from Tebbit. Maybe it’s because he delivers them with a playful smile on his face. Maybe it’s his incredible politeness. Maybe it’s his age: there are many men in their 70s who have similarly grim views of the world, and it’s hard to hate them for it.

There is also something deeply melancholic about Tebbit that makes it impossible not to feel sympathy for him. He doesn’t conceal the regret he feels for not standing in the 1990 Tory leadership election. “First of all, I think if I stood, Major probably wouldn’t have done,” he says. “He wouldn’t have got past the first ballot even if he had. Do I regret it? Sometimes, yes, I do. When things go wrong. I think, ‘bloody hell, I wouldn’t have let that happen’. But I felt it wouldn’t be fair to my wife – that, after all, was the reason why I left the government in 1987.”

And there’s another reason why it’s impossible to demonise Tebbit: he has been extraordinarily kind to his wife since the 1984 IRA bombing of the Tory party conference, which left her paralysed. He quit frontline politics for her. He still wakes in the night to turn her in bed. He pushes her wheelchair, reads to her and helps cut up her food when they go out to dinner. “We survived and we both learned a great deal from it,” he says, delicately. “I understand a lot more about the difficulties that disabled people face than I did 20 years ago. It’s difficult for outsiders to know just how bloody awful it can be.”

It is a sign of just what an infuriatingly charming man Tebbit is that as we leave our table, a small part of me actually wishes he had become prime minister – or that at some point he had made a comeback, just like Michael Howard.