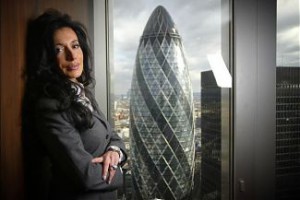 Luckily, Britain’s most famous Italian breaks the awkward silence herself. “It’s a ver-r-r-y, ver-r-ry nice view! Excellent choice of restaurant!” A waiter guides us towards our table and she continues: “Before we start Saznam, I have a question for you. Tell me. Where your name from? India or Pakistan?” India. “Ah, I can tell from za cut of your eyes.” I’m not sure what Nancy means by this.

As she continues making impenetrable chit-chat (“Even at school, when it was always mathematics, Monday mornings I usually hate . . .”), I fear this may be the case for the whole of our Valentine’s Day lunch. When her publicity team had (cheekily) asked if we could run Nancy’s quotes past them before publication, I had assumed they were just trying to prevent her from being quoted on the subject of her boyfriend – England football coach Sven-Goran Eriksson. Now I see there might be another reason: Nancy, who apparently communicates with Sven in Italian, needs translation.

However, my anxiety subsides. As she orders her food, it slowly emerges there is method behind Nancy’s mad English. Apart from a few words – “countryside”, for instance, which she rather poetically calls “the natural” – she very rarely gets words wrong. Rather, she tends to miss them out, or gets them in the wrong order, so that “I’m allergic to mushrooms”, comes out as “they using mushrooms and I allergic” and “what is haddock?” comes out as “what zis so-called haddock?” By the time she finishes talking to the waiter (she opts for the starter of Jerusalem Artichokes, followed by pan-fried fresh haddock with crab kedgeree), I’m feeling a bit more optimistic about the encounter. Understanding her is just a case of rearranging words and filling in (all the) gaps. I know exactly the question I want answered first: what on earth does Nancy Dell’Olio do all day? Clearly, the hair, make-up and clothes take a couple of hours. But how does she fill the rest of her time?

“Ah, there comes a time in (your) life when you (are) more prepared to spend time on humanitarian issues,” she declares, drawing attention to her new role as an ambassador for the Red Cross. “I did my first visit in a refugee camp in England. It was quite a nice experience just outside London, to meet young people, see how they (have) been helped by za Red Cross. Za first mission abroad was (to) Kenya. I was so excited. At same time quite scared. I don’t think I’m going to go back there for (a) holiday, but it was fantastically interesting. I have always been an admirer of za Red Cross.” She flutters around her handbag nervously. “Hold on one minutes – I need to get my pens.” She pulls out a pen and some notes. It is clear that she finds interviews difficult. Eating and talking at the same time is hard, but even more so when you are speaking in a foreign language and sporting the world’s most lavish hairstyle.

Having scanned the notes, she begins talking about her other big commitment: Truce International, which she created with Eriksson to “mobilise the power of world football as a force for peace”. The idea, which came to her after September 11, is to build pitches in war-torn areas and to establish an annual day of peace, when combatants put down their weapons and play football instead.

“Truce is not a charity, it is a movement,” she explains. “I’ve always been interested in football but then it became part of my life, so (it has become) more (interesting to me). Before I didn’t understand (the rules). Now I understand better. Zat’s why I enjoy (football). If you don’t know za rules, it’s difficult to enjoy (football), but I enjoy (football, now). It is an international language.” I’m not sure I grasp the concept. Surely football just promotes hostility, dividing people into artificial tribes. “Well, no!” she responds, hacking at her starter. “When you see (a football) match, you see two (teams), of course. Football, it divide, but it (also) create(s) energy!”

The media haven’t been slow in observing that Truce, which has been running for more than two years now, seems to lack a little “energy” of its own. Apart from a football match between British MPs and the Iraqi national team and the delivery of 1,000 footballs to Kosovo, it doesn’t seem to have done very much. Not so, responds Nancy. This year she and Sven will launch two projects in the Middle East: A Soccer School for Peace, where Israeli and Palestinian children will be encouraged to develop football skills together, and the launch of the first “Pitch for Peace”. “Hopefully we can have za flag of za UN (flying over it). Finally we are very close with concrete projects.”

As admirable as this work is, Nancy must still have a lot of time on her hands. Doesn’t this multi-lingual lawyer, who studied at Rome University and NYU, and practiced in the US and Italy before moving to London with Sven, get a bit bored in the role of (to use her own words) a “geisha”. “Zat was a joke! I was trying to be provocative! Of course I’m not a geisha!” She repositions a strand of hair. “I still do some (law) consultation in Italy and America. And I really loved being a lawyer. But then I got bored. I have decided zat my private life is much more important than my career.” Ah, her relationship with Sven. Nancy’s silence on the subject of Sven’s affairs seems curiously English. “Yes, it is English in a way. (But) I think it’s za right way – it’s a sense of inner life and dignity. Za more I talk, za less I talk.” I think she means the opposite: the less she talks, the more she says. “More is less, maybe it’s true. I don’t have to show how sensitive, how vulnerable, how fragile I am.”

It’s interesting that she now refers to Sven as “my partner” and at another point as “family”. Previously she has always referred to the Swede as “my man”. Does this mean they are to marry? “Za Financial Times! Ooooooh! Why do you have these questions! Hahahhahaha!” If I was interviewing the head of the World Bank, I’d ask the same question, I lie. “I don’t know – we’ll see, we’ll see. Anything is possible. When you live together everyday, (there’s) not a big difference (between that and marriage).” And what about kids? Sven has children – a son and daughter in their 20s. Nancy has none. “I have no idea, I am sure zat I will be a good mother. I think zat now is za time, more than when I was younger. I’m more prepared.” Would she like to adopt? “Adoption is a great institution, of course.” A nibble at her haddock. “On za night of za Asian tsunami I wanted to adopt as much as possible.” I thought this line of questioning would annoy Nancy, but it doesn’t seem to. There are only a couple of times during our chat when she gets even mildly tetchy. They are: (1) When I ask her age. She tells me with a shrug and a sigh that the year of her birth is 1961. (2) When I mention the skin-tight red cat-suit she wore to a Downing Street reception in 2002. “It was ironic! And I liked it! I’m going to auction it for charity one day! Zat will be za next time I wear it!” (3) When I ask where she and Sven are going on holiday. “To za moon!” (4) When I inquire whether it’s true that she has been keeping a diary and will one day spew forth details of her time with the England team. “It’s never going to happen! I’ll make once for clear! I will not write (it) before I die!”

Nevertheless, she is considering other book projects and has just been working with Toby Rowland, son of the late mogul Tiny Rowland, to act as a host on an internet game show on midasplayer.com.

“Half the income will go to the Red Cross. I’m not into the internet world. I don’t even know how to text message. It’s another planet. But hopefully it will raise lots of money.” As she says this, the waiter comes and asks if we have finished eating. I have demolished my food, but Nancy has barely touched hers. “It was a good suggestion,” she says to the waiter. “But I won’t finish it because zis (interview) is not very relaxing.” When I say that I have finished with the questions, Nancy physically relaxes. “I am expecting you to picture me in the right way,” she says. “Hopefully I have been able to communicate to you zat I am me, without use for anyone else. (I want you to) not mention my partner.” That might be a bit difficult, I think to myself. That is, after all, what she’s famous for. She continues: “You never know, I might ask you to do my official biography one day. And by za way I am looking. You are like Cinderella. We will see if you get za shoe.”