Published in The Financial Times, 2005 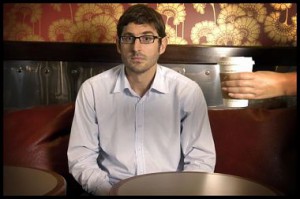 In retrospect, I should probably have conducted my interview with Louis Theroux in his kitchen, as he removed the limescale from his kettle, or in his bathroom, as he gave his toilet bowl a good scrub. After all, talking to people in intimate places is one of the ways in which Theroux extracts delicious revelations from his documentary subjects – revelations such as the one from Tory MP Ann Widdecombe that she possesses a collection of teddy-bear plates, or from former TV presenter Sir Jimmy Savile that, in his days as a nightclub manager, he would tie up miscreants and lock them in a basement.

However, for random reasons, we end up meeting at an anonymous branch of the sandwich shop Pret A Manger on the edge of the City of London. When I arrive the 35-year-old documentary maker is sitting in a corner, under a giant picture of a pumpkin, a cup of coffee between his hands, staring into the distance. Despite the stubble and the crumpled shirt and his general air of distraction, he strikes a handsome figure – dark, big brown eyes, 6ft 2 1/2in tall – and I suddenly understand why three female colleagues had offered to accompany me to the assignment and why Tatler magazine once named Theroux the seventh most-wanted single man in Britain.

“Did they really say that?” he says, sounding endearingly surprised. “How funny. I never even saw that. But have you seen this week’s Heat magazine? Someone told me I was in the ‘weird crush’ top 10. I think I got 4 per cent of the vote!”

Unfortunately, Theroux’s work, hanging out with brothel operators, neo-Nazis and the likes of Sir Jimmy Savile, has also got him on to less desirable lists – the neo-Nazi group Combat 18’s hit list, for instance.

“Yeah, I only found that out last year!” he exclaims. “But I’ve had the world of the white power movement demystified for me. All it means is that there is a confused skinhead in Belfast or somewhere, who has compiled a list of celebrities he doesn’t like and shown it to a mate. I certainly wouldn’t get too worried about it. I think Cilla Black and Lenny Henry and most of the world of light entertainment are on it.”

It’s hard to tell from this comment whether Theroux, who began his TV career as a correspondent for Michael Moore’s TV Nation, necessarily sees himself as being part of the world of light entertainment, but it is a world he at least flirts with. At their best, his documentaries – Weird Weekends, where he met a series of off-beat characters, and Louis Meets . . . , where he focused on celebrities such as Ann Widdecombe, disgraced fellow MP Neil Hamilton and his wife Christine, and the publicist Max Clifford – blur the boundary between documentary and comedy, between the real and unreal.

It’s an incredibly effective formula, but also one that has drawn criticism from people who suggest that behind Louis’s on-screen deference, facial exaggerations, naive questions, silences, wide-eyed enthusiasm, and general air of befuddlement, lies a shrewd media operator who manipulates his subjects – a view propounded by one of his subjects, Ann Widdecombe, who remarked after her documentary: “He pretends to be dumb and he’s not. For instance, he seriously tried to convince me that he didn’t know that St James’s Palace was still standing. It is not remotely credible.”

“It was true though,” protests Theroux, blinking under the giant pumpkin. “You get confused sometimes. I just wasn’t sure if it was still standing. I know it is now, but I am not a big palace watcher.”

But, Louis, you have a first-class degree in history from Oxford.

One of those famous Theroux silences.

“Had she asked me if it was standing in the 18th century I would have been able to tell her. But, you know, her general knowledge is not that good either. She didn’t know who Alexander Dubcek was . . . ”

Another silence – this time mine, as I wonder whether I should admit to not knowing who Dubcek is either.

“Yeah, yeah, but you’re not an MP,” he says, sensing my ignorance. “He was a Czechoslovakian politician. A famous reformist. I thought she should know that.”

Widdecombe has not been alone in the criticism. Several commentators castigated Theroux for saying to Christine Hamilton, as he was extracting intimate confessions during filming: “I’m not a journalist, I’m a friend.” He scratches his stubble as he recalls the remark. “Yeah, she gave me some flack for that afterwards as well. The thing is, it was a joke, y’know. It was supposed to be self-parody, an ironic remark.”

I suspect that some of the criticism comes from people who find it hard to reconcile Theroux’s sophisticated background and intelligence with his on-screen persona and populist subject matter. After all, his father is the American travel writer Paul Theroux; his English mother worked for the BBC World Service, he went to Westminster public school and then to Oxford. Certainly, having watched all his documentaries and come to feel that I knew him a little, his off-screen intellectual confidence comes as a bit of a surprise. At one point, when we discuss his new book, The Call ofThe Weird, in which he revisits some of the offbeat characters he met during Weird Weekends, he even quotes Nietzsche at me.

When pushed, Theroux does concede that there is something contrived in how he relates to his subjects on camera, saying that, like prostitution, journalism can involve “professional manipulation”. “Prostitutes and journalists are not that dissimilar, especially when it comes to human interest journalism that involves a little bit of beguiling and seduction. You have to become intimate in a slightly fake way with people. But there are moments of realness within the prostitute relationship just as there are within the journalist relationship.”

I’m not sure which one of us is the whore in this particular scenario – maybe we both are – but I think he’s right. And the analogy is an apt one, as one of the people he got back in touch with for his very entertaining book was Hayley, a prostitute. Other weirdos included gangsta rapper Mello T, a porn star and some UFO contactees in Arizona. He says that, to his surprise, he found many of his subjects more irritating the second time around, although he did enjoy meeting members of the patriot movement again – the paranoid sect of self-styled freedom fighters who believe that the end of the world is imminent and that we are all being taken over by a shadowy cabal of evil-doers.

“There is something deeply romantic about these strange bearded renegades who carry guns and are willing to lay down their lives for their vision of correct living, even if it comes to nothing. There is something about their ambition that fulfils my slightly pessimistic view of human perfectibility.” He laughs. “That is quite a long word isn’t it? Almost as long as tintinnabulation . . .”

The comment refers to an earlier remark I made about the book – that the cleverness of the prose and his use of big words like “axiomatic” and “tintinnabulation” came as a surprise. I had asked him to explain what the latter word meant, and he had done so by quoting Edgar Allan Poe’s “The Bells” (clarifying in the process that tintinnabulation means bellringing). The conversation had reminded me of a phrase one journalist had used to describe Theroux a few years ago – “schoolmasterly”.

“I like masterly. But schoolmasterly – I disagree with that.”

I throw other adjectives that have been used to describe him in his direction – indecisive.

“Yes, I am indecisive. I think it is part of my personality. Yeah.”

He has also been described as “obsessively private”.

“No. Though I do think that if you are in the public eye you have to keep something back. You don’t want to become a human soap opera.”

Presumably the soap opera he’s referring to is his marriage to Susanna Kleeman, a girl he met at Westminster when he was 15 – a relationship hehas always refused to discuss. But now he seems perfectly happy to explain.

“You see, I was married.” He clutches his cup of coffee, like an OAP desperate for warmth. “What happened was that my girlfriend was living with me in New York. She was having trouble finding work . . . legally. So we got married, to make it easier for her. We never really considered ourselves married in the full sense – there were no wedding photos or anything like that. It was really a marriage of convenience. I hope that I am not going to get arrested for that.”

I establish that they got divorced and that he now lives with his girlfriend Nancy, to whom the book is dedicated. And before we part Theroux adds that the book doesn’t mean he is giving up on documentaries. “The plan is to try and come up with some good ideas and do some longer films. Maybe even a 90- minute feature documentary. There have been so many great feature-length documentaries in the last few years. I would like to make a contribution.”

Any ideas? “There are a few. But I haven’t really found the right one yet. I have to fight hard against doing something dark. I would like to do a documentary about Jonestown – the mass suicide in Guyana in the 70s where Jim Jones was able to convince nearly a thousand people to take their lives. But people would probably prefer it if I did something lighter.”

Louis Theroux’s ‘The Call of the Weird: Travels in American Subcultures’ is published in hardback by Macmillan