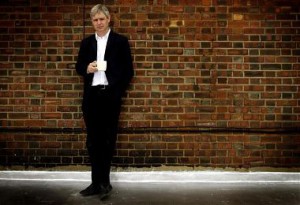 Martin Amis once observed that interviewing literary heroes was an excruciating business. “As a fan and a reader, you want your hero to be genuinely inspirational. As a journalist, you hope for a full-scale nervous breakdown in mid-interview. And, as a human, you yearn for the birth of a flattering friendship. All very shaming.”

Within five minutes of walking into the west London flat that he uses as an office, I have told Jonathan Coe that his last novel, The Rotters’ Club, was so brilliant that I bought it for at least 10 different people; that his new novel The Closed Circle, a sequel to The Rotters’ Club, is so compelling that I didn’t see anyone or watch any television until I finished reading it; that he is, in my opinion, a genius, the finest comic novelist of his generation.

Listening back to the tape, I sound like a teenage fan given a once-in-a-lifetime opportunity to meet Robbie Williams. I’m surprised Coe doesn’t throw me out straight away. As it happens, he just stands there as I babble, shifting weight from one leg to another, blushing and mumbling the occasional “thank you”. Eventually, probably to just get away from me, he asks if I want a drink and dashes into the kitchen for five minutes.

By the time he returns I am a little less excitable and manage to pose a question that isn’t cringe-making: how does it feel having The Closed Circle come out, three-and-a-half years after The Rotters’ Club? There is a pause before the Birmingham-born writer replies. “When I originally came up with the idea of writing a novel in two parts, which is what The Rotters’ Club and The Closed Circle are, I didn’t think how risky it was, potentially,” he says. “If nobody had liked The Rotters’ Club, there would have been no point writing a sequel.”

But everybody LOVED The Rotters’ Club! “Most people liked it,” he says, running a hand through his pudding-bowl haircut. “So it actually feels very nice to be publishing a book which has an eager readership.”

As with so many people who are funny for a living, Coe isn’t particularly hilarious in the flesh. He has a serious, donnish air that is accentuated by his habit of plunging into long silences. He is also relentlessly self-critical. Before long he has described his new book as “not as funny as my other books”, his biographies of Humphrey Bogart and James Stewart as “not great”, and, worst of all, he disparages What a Carve Up!, the extraordinary social satire on 1980s values that won huge critical admiration, drew comparisons with everyone from Waugh to Dickens and gained him the 1995 John Llewellyn Rhys Prize.

“Passages I remember thinking were funny at the time, now I see as a bit tub-thumping,” he says. “As a structure it probably still holds up, but I think the tone is not as well calculated as it could have been.”

Indeed, Coe is so self-deprecating that, on reflection, my teenybopper enthusiasm serves a purpose: a counterbalance to his gloominess. I ask him if he ever reads his reviews, which are nearly always positive. “I had a couple of real stinkers for The Rotters’ Club.” Really? I find that hard to believe. What did they say? “Erm …a fellow novelist called it ‘disgraceful’. I thought that was going a bit far.”

I have since looked up the reviews for Coe’s beautifully composed novel of 1970s angst and adolescence, which is currently being filmed as a three-part drama for the BBC, and discovered that this assessment (Philip Hensher: shame on you) was pretty much an exception.

Coe is right about The Closed Circle, which picks up the stories of The Rotters’ Club characters in the new millennium, as they grapple with middle age: it isn’t as funny as his other six novels. But it is intelligent, poignant and truthful nevertheless. Benjamin Trotter, the schoolboy hero of the first book, is still working on his huge unfinished novel and is still in love with his childhood sweetheart, Cicely. His precocious, irritating brother, Paul Trotter, is trying to climb the greasy pole as a New Labour MP and attempting to keep quiet his affair with his glamorous media assistant, Malvina.

Most of the book was written outside London. “I enjoy writing more when I’m not here,” he says, surveying the yellow-painted room with its pine furniture. “I enjoy life more generally when I’m outside London.”

The horridness of London seems to be a theme in all his novels. “Well, you know, London is big and noisy and dirty and it’s a battle to live here. I have lived here for 18 years and I still feel a little bit like a foreigner. It’s not that I have to be in the Midlands to feel that I belong. But I do like provincial England. And I think one of the exciting things about writing The Rotters’ Club, a novel set in Birmingham, was finding an identity for myself as a provincial writer. I’ve been trying to pretend that I’m a London writer, a metropolitan writer – but I’m not. I have a provincial sensibility.”

When considered as one book, the combined 800 pages of The Rotters’ Club and The Closed Circle comprise Coe’s most successful work. It’s surprising to hear that Coe’s original plan was even more ambitious: to write a six-volume sequence following his characters through the 1970s, 1980s, 1990s and up to 2000. “Somewhere along the way I lost interest in the middle four volumes.”

Could he be tempted to write those? “I’ve always said not,” he replies, “but I was teaching on a writing course last week and started knocking around ideas for what some of the characters might have done in the 80s and 90s, and I started to get interested – it’s a rather worrying thought.”

Worrying because the publication of The Closed Circle marks the end of a marathon writing session for 43-year-old Coe. Since 1994 he has published four long novels and a 486-page biography of avant-garde writer B.S. Johnson. He desperately wants some time off and then, possibly, a change of direction: “I have a disquieting sense that I don’t have any more of these panoramic serio-comic political novels in mind. Maybe I’d like to write something shorter. Finding my length was one of the things I had to do as a writer. I realised that I was more a long distance runner than a sprinter. But I feel like I’d like to have a crack at the 100 metres next time …”

Coe was always destined to be a novelist. Born in 1961 in a leafy suburb of Birmingham, the son of a research scientist and primary school teacher, he lapped up Sherlock Holmes from a young age and wrote his first novel at the age of just eight. He got a place at the local direct grant school, went to Trinity College, Cambridge (arriving a

Tory supporter, leaving a Labour voter), and completed a PhD on Henry Fielding’s Tom Jones at Warwick University (during which time, he says, he didn’t get laid once).

He subsequently dabbled in music, legal proof-reading and journalism but, all the time, kept on writing. There were three unpublished novels by the time he hit 25. His break came with The Accidental Woman, a novella for which he received a Pounds 200 advance. “It was the only time in my life I’ve literally jumped for joy,” he says.

Did he really jump? Coe is so reserved that it’s quite hard for me to imagine him leaping around. “No, I did jump – a little jumpette – about three or four inches.” A mischievous smile.

Did he always believe he’d get published? “I remember my grandfather saying to me, just before he died, that I should give up writing and become a teacher because it was too insecure a career and would probably never happen. That was a shock to me, because we always talked a lot about writing and books. But I took no notice really.”

It’s a good job he ignored the advice as he is now a bestseller, not only in Britain but also in France, and lives comfortably in London with his wife Janine, and two young daughters. I ask him whether success has made him rich. “Am I rich? On the last day of school another boy came up to me and said: ‘Jonathan, you’ll never be rich – you’re not the right kind of person.’ When this guy got in touch with me recently, I thought: ‘This will show him – I’m pretty well off now.’ But when we met I realised what it really means to be rich. He took me to Le Gavroche and spent a shameful amount of money on dinner. He was right. But if we are talking in terms of national averages, I am rich. Which is …a surprise.”

Does he still enjoy writing? “It can be very boring. And hard. You often have an ideal vision in your head of how a passage will pan out but when you put it into words, it seems flat. Taking anything ideal and making it real is bound to end in disillusionment to an extent. That’s really what these two books are about: in adolescence you live in a world of virtual possibility and in middle age you don’t.” Another donnish silence. “But however boring and difficult it is, it is still the most enjoyable way to make a living. Except, perhaps, being a musician.”

Ah – the prominence of music in his novels had made me wonder whether Coe was something of a frustrated musician. “Yeah,” he confirms. “Frustrated by lack of talent.”

How bad was the music he made when he was performing in bands in the 1980s? “We were just messing around but I do remember it being very good fun. I enjoy the social dimension of being in a band – you don’t get that as a writer. My idea of heaven is to spend two days in a recording studio, getting a piece of music right.” Does he play now? “I mainly play piano. I aspire to being an improvising pianist like Keith Jarrett. But I’m not Keith Jarrett.”

He adds that playing more music is one of his resolutions for 2005. The other being to do less writing. “I’d like to just spend some time wandering around London: going to galleries, going to the cinema in the afternoon, stuff I haven’t done for about a decade. And normally when I do things like that, ideas pop into my head.”

Does he have some ideas on the go already? “I’ve got an idea for a play, but I’m waiting for a new idea for a novel. What I’d really like to do is write a good British film. Something as good as Don’t Look Now or Black Narcissus. I personally think it’s been about 20 years since we made a really good British film …”

I can’t help declaring that I think he’d write a brilliant film. He blushes and, in a characteristically downbeat assessment of his prospects, adds: “The odds are stacked against me doing that, as far as I can see.”