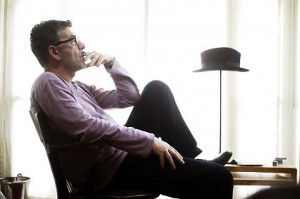 Jack Vettriano opens the door to his flat on the second floor of a mansion block in Knightsbridge. “Hullo,” he grunts in his Scottish accent. “Is it Sadman?” No, not quite: it’s Sath-nam. “Sad-dam? Right. Would you like something to drink? I have coffee, coffee, coffee and coffee. An’ it’s decaff. Is that OK?”

As Britain’s most popular contemporary artist skulks off to his kitchen, I have a prowl around his studio, which also acts as a sitting room. It is absolutely gorgeous: a high ceiling, a grand bow window overlooking a smart street, a huge chandelier. If it feels familiar, it’s probably because so many bits of it have ended up in his work.

Today there’s nothing at his easel, but there are a couple of paintings on the walls. They are unmistakably Vettriano in style: realist, wistful, noir, a little bit Edward Hopper, a little bit Raymond Chandler. The man whose name itself sounds like it has been taken from a Chandler novel (his real surname is Hoggan – he took on his grandmother’s maiden name when he became an artist) returns bearing mugs of coffee.

As he lights the first of several Marlboro Lights, I congratulate him on the sale, a few days earlier, of The Singing Butler, which was sold by a collector for an incredible £744,800 – some £741,800 more than Vettriano originally sold it for in 1991. The auction was fuelled by the fact that the picture is Britain’s biggest selling art image – more than 1m prints and posters have been sold, earning Vettriano a reported £250,000 a year in reproduction royalties.

“Yeeah,” drawls the 53-year-old, self-taught painter. “Everybody has been on the phone trying to get an interview about the sale, but, y’know, I just don’t think it’s appropriate for me to say, ‘Ooooh yeah, isn’t that a lot of money.’” Nevertheless, it must be pleasing to have a picture sell for so much? “I’m delighted for the owner of the painting, but I’ve got past the pleasure of the sale. What I feel now is just a higher degree of pressure to produce work which is considered to be of some value to the public. The problem is that I’m now stuck in what I call the success trap.”

It’s surprising to hear Vettriano being so glum. One would think that the man who only began to paint at the age of 21 when his girlfriend bought him a set of watercolours, and who was 37 before he sold a couple of paintings, has many reasons to be ecstatic. As well as the sale of The Singing Butler, in recent months there’s been a South Bank Show documentary about him, an appearance on Desert Island Discs, and in June he’s got his first exhibition in three years, at London’s Portland Gallery, where all 36 pictures will probably be sold for huge sums before the exhibition even opens.

“Yeah, it has been an astonishing sort of six months,” concedes Vettriano, sounding utterly unastonished. “If you go back to last autumn, I got a doctorate from St Andrews’ University, y’know, an OBE, and then there’s been the media stuff …” So why the sad, stubbled face? “Well, while I’m not an unhappy person, I’m melancholic. At any given time you better believe that I’m not thinking about holidays or buying a car or doing something good. I’m thinking about a bad thing that somebody said to me three weeks ago.”

Admittedly, Vettriano has quite a few “bad things” with which to feed his melancholy. As popular as he is with the public, the critics loathe him. His work has been variously described as “tosh”, “dim erotica”, “flat”, “soulless”, “pastiche”, “sexist”, “no more than colouring-in” and “badly conceived soft-porn”. He makes no pretence of not caring about this criticism, returning to the subject of the critics again and again and again.

“Now that prices have touched the level they have, the broadsheet critics are going to think they better look at my work,” begins the man whose first job after school was as an apprentice at a coal mine in Fife. “I’m steeling myself for an uncomfortable exhibition this summer.” But has he not recently detected a change in attitude to his work among journalists and galleries? Is it not the case that Timothy Clifford, director of the National Galleries of Scotland, sent him a letter of congratulation when he got his OBE? “You can quote me saying that it was barely a letter,” he says bitterly. “It was barely a letter. And, yes, there have been a few newspaper leader columns saying that galleries should buy my work, but the critics on the same papers totally disagree.”

Vettriano, who has in the past accused his critics (“nobby academics”) of “talking horseshit”, cries cultural snobbery. “I don’t feel that I deserve to be in any public collection. All I’ve ever said is that the money spent on new purchases is taxpayers’ money, so why don’t the curators listen to the taxpayers? Why do they just please themselves? If they want people in galleries, why not put in something in people actually want to see?”

He sips his watery decaffeinated coffee and continues his rant. “I hate it when people say, ‘His work is derivative.’ Everybody’s work is derivative. And, y’know, I’ve never said I’m changing the art world. And when I hear critics saying, you know, ‘His art appeals to the kind of people who watch soaps,’ that’s just breathtaking arrogance! Who the hell do they think they are? I despair at their arrogance!”

He so despairs at what the critics say, that they led to him leaving his home in Scotland for London in 1999. “Y’know Scotland has 5m people and two major newspapers and I just found it increasingly uncomfortable living there. It’s no fun, when you are having dinner, having people come by and give you the sympathy vote. I was a big fish in a small pool there. Now I’m a minnow in a swimming pool. That’s what I love about London. I’m c-list.”

He says he still loves his home country, that he goes to visit his elderly parents in Scotland every six weeks or so, but now sees London as home. He adds that his life in the capital is very focused on work: he is at the easel by 6am, five days a week. He is vague about how he fills his spare time, struggling to name any pastimes. “I like rummaging around junk shops, but I don’t really have any great hobbies.” A hand through his oily hair. “I suppose I have fetishes though.”

I glance at the glass cupboard full of women’s shoes on one side of the living room. He wouldn’t have a shoe fetish, would he? “Well, who doesn’t have a shoe fetish?” A silence as I struggle to respond to his question. “I just think shoes are fabulous pieces of sculpture and wish other men would as well. If God didn’t want women to walk in stilettos, he wouldn’t have invented Manolo Blahnik, as the saying goes.”

Vettriano is always making remarks like this – after the critics, sex is his favourite subject. Indeed, he seems to like talking about sex and women more than talking about work. “I find talking about art a load of arse,” he says as his picture is taken. “I’d rather go to dinner with someone I fancy than spend an evening with a bunch of other artists and critics. I mean what is there to say? Pictures are just wall coverings.”

Ask him what the themes are of his forthcoming exhibition and he will remark: “I’ve never had themes to any exhibition.” But get him started on the sexual content of some of the pictures and there’s no shutting him up. “There’s one called Wicked Games, which shows a threesome and a painting called Mind Bending which is about, y’know, that feeling when somebody knows the code to your deepest desires and whispers it into your ear. Y’know that feeling? And your mind goes wrrrrrrrr?” I blink back at him, blankly. “Now agree with me please.” Er, yeah, I lie, I know that feeling. “Well, there’s a rather nice painting, I think, of a man whispering something in a woman’s ear. I like that kind of thing, it’s my world, y’know.”

Which brings us rather neatly to the subject of Vettriano’s sex life. He initially describes himself as “single since 1985”, when his marriage ended, but eventually admits that he now has “somebody” in his life. Apparently, he has bought a house with this “somebody” in Oxford? “Yeah,” he grunts after a long silence. He’s being very sheepish, I remark. “Baaaaaaaaaa!” he bleats. “No, you’re just being very inquisitive.” Will he get married again? “I’m not sure that I would.”

He’s even more testy on the subject of his elder brother William Hoggan, an engineer in Scotland who recently had an art exhibition of his own. “I have no comment to make about my brother,” he snaps. You’re being sheepish again, I remark. Not even a bleat this time. “My brother and I have no relationship to speak of and I’ve got nothing to say about him.” So they’ve fallen out? “I’ve got nothing to say about him.”

The atmosphere is now very tense, but unfortunately there’s still one more difficult subject to discuss. I close my eyes and blurt it out: five years ago a Scottish tabloid accused Vettriano of stalking a woman in Edinburgh, of bombarding her house with nuisance calls and sending obscene letters and drawings. “Must we go here?” he complains, stubbing his fag out testily. “Let me tell you, in 1991 I invited a girl to an art exhibition by placing a note on her windscreen and years later she went to the police with some lurid stories about pornographic drawings and stuff. She was paid by the newspaper she now lives in Spain. Draw your own conclusions.”

It’s a relief to move away from these awkward matters and return to the subject of his work. I ask if he has regretted licensing any of his images, which have ended up on everything from posters to cards, mugs, umbrellas and Marks & Spencer’s biscuit tins. “I’ve turned down far more things than I’ve agreed to,” he replies. Such as? “Dishcloths, collectors’ plates. But yes, there are some decisions I’ve made licensing-wise that I regret. From now on I will concentrate on works on paper. Cards and postcards are fine, but let’s get away from umbrellas.”