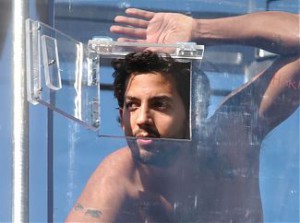 “Hello, I just woke . . . up,” says David Blaine in his trademark drawl, dressed in a black T-shirt and what appear to be black silk pyjamas, standing in the entrance of his pal’s penthouse flat in west London. “It’ll take me…. A little while…. To get with…. It…. I still have…. Jet…. Lag….”

This is very bad news indeed. Blaine has a bit of a reputation for being a difficult interviewee and the last time he was really really difficult (a now legendary encounter with Eamonn Holmes on GMTV during which Blaine said virtually nothing) the excuse he gave was that it was early in the morning and he was very “tired”.

Worryingly, it is early in the morning again (for a Saturday at least) and Blaine is looking very tired again. He talks slowly enough when he’s fully alert, but even the shortest sentences now seem like a serious problem. “Would you… Like… Some… Er… Orange juice?” he asks over the course of what feels like five minutes, guiding me into the kitchen, reaching blindly for the refrigerator.

We are in a gorgeous multimillion-pound glass penthouse, which belongs to Jeffrey Steiner, an Austrian-born financier and long-standing friend of Blaine’s, who is sitting in the kitchen reading the FT. “I guess Jeffrey reads your paper everyday,” says Blaine, looking a little more awake as he beckons me towards the living room. “I normally don’t read it. But I started looking at it recently. It’s cool. All the serious guys read it.”

He probably says this to all the journalists he talks to, but the remark comes as a relief – at least he’s in the mood for a chat. He curls up on the sofa, clutching a foot with one hand and slugging a carton of juice with the other. There is a sticking-plaster on one arm – following his 44 days in a transparent box suspended from a crane next to the Thames with no food, his blood is being monitored by specialists studying the long-term effects of starvation. On the other arm, in tribute to his hero, writer and Auschwitz survivor Primo Levi, he has a tattoo of Levi’s concentration camp number.

Several weeks after the conclusion of the London stunt, during which he survived on just water, he doesn’t look undernourished at all – his brown skin (he is of mixed Russian, Jewish, Puerto Rican and Italian heritage) is positively glowing.

The 30-year-old magician nods, indicating that he is ready to begin. I get straight to the point. When it comes to David Blaine there’s only one question that really matters: why? Why did he starve himself for 44 days? Why did he climb an 80-foot pillar in New York City and stand on a platform for 35 hours? And why, for that matter, did he spend 62 hours in a giant cube of ice? Why-oh-why-oh-why-oh-why?

“What drives me?” he asks rhetorically in response. “What do people say?” They say it’s probably a desperate need for approval and publicity, possibly related to the fact that your mother died soon after you left school. “I don’t think so,” he responds, rubbing his tired eyes. “You see I was doing these kind of things when I was five. I was on the swim team and I would say to everyone, let’s see how long we can go underwater without breathing. If someone did half a lap, I would do two and a half. I’m just a big kid who’s doing what he did as a little kid. I’m a performer.” It’s interesting that he describes himself as a “performer”, rather than a magician or an illusionist or all the other things he has been called by the press this year. The difference between how he sees himself and how we see him is perhaps why “Above the Below” (his stunt by the Thames), went down like a bucket of cat sick with parts of the media. Generally, the British seem to see him as a magician and the London stunt simply didn’t work as a magic trick. But, maybe, as a performance, as an artistic performance at least, it wasn’t such a failure. “People only focused on the starvation thing,” says Blaine, lapping up the argument. “But I was denying more than food – all the temptations of this world, from sex, to movies, gossip, phones, books and TV. Everything that normally distracts us from existing as we are.”

This interpretation is intriguing but there is a problem with it. Blaine made a lot of money out of the stunt, which, if it was an anti-materialist statement, surely makes it a profoundly hypocritical one. “I didn’t make any money,” he insists, staring me straight in the eyes. “The amount I made was the amount I could make doing card tricks for an hour for a corporation. I’m not driven by money at all. I just wanted to do it, but we needed to cover our costs, which is why we did the TV deal.”

And how did he feel about the TV coverage? While the stunt’s validity as an artistic performance is up for debate, there’s absolutely no doubt at all that it made atrocious television. “Yeah, it was bad TV,” he agrees, cringing. “The first hour of TV was just unbearable – I was very upset by it. But it was arranged very quickly – we only had three weeks to make four hours of TV. The film by Harmony Korine on the DVD is a lot better – a cinematic narrative essay – which is what it was meant to be.”

This frankness is surprising. I expected Blaine to be curt, earnest and weird, but he isn’t any of these things. He is articulate, open and intelligent. His basso profundo voice is eerily hypnotic and full of drama – he permanently sounds as if he’s doing a voiceover for a film trailer. However, I’m still not convinced he has answered the question: why? There is, of course, the possibility that he doesn’t want us to understand. “Van Gogh was lucky,” he says at one point. “When things are so way ahead of their time that no one understands you, that’s the greatest.”

There is also the possibility that he does these things purely for the thrill of risking his life. It is a possibility that comes to mind when he discusses his heroes, Primo Levi, Houdini and Buster Keaton. “I really admire Buster Keaton. I love the fact that he would do his own stunts. People couldn’t understand the concept of a big movie star risking his life – that concept is amazing to me.”

Which brings us to the subject of his next trick/stunt/performance: plunging from a helicopter into the river next to Brooklyn Bridge on his birthday, the fourth day of the fourth month of 2004. The question, once again, is: why? “Well, for four reasons,” he says. You may have noticed that he has a thing about the number four. “Number one: I think the image of a man falling out of a helicopter into a fast-moving, dark, scary-looking river is incredible. Number two: I grew up next to the Brooklyn Bridge and have always wanted to do something there. Number three: I’ve always wanted to go into that river because everybody’s always so afraid of it. Number four: the training for it is going to be the greatest thrill ever. I can go to Hawaii and just learn how to cliff dive for months.” Is he a good diver? “Not really, I’ve never gone over 10 metres. This one is going to be over 40m. When you land into water from that height it’s no different to hitting pavement.”

Frankly, this sounds pretty bananas to me – and this is another possible answer to the question “Why?”. Blaine could be doing what he does because he is unhinged. To ascertain just how unhinged he might be, I ask what other things he is arranging. Apparently he has a seven-year-plan, written in blue ink on a frayed scrap of paper. “Yes,” he confirms. It includes the London stunt? “Yes.” What stage of the plan is he at? A spooky 15-second pause. Eventually, he replies: “The very beginning.”

What else is on it? “It includes many things, from a live show that I can tour around the world, to a film about magic, to creating some of what I feel could be the greatest images in the world.” Pestering him for some more information he turns off the tape recorder, makes me swear to secrecy, and tells me about two other projects in the pipeline. One of them will see him going back to doing magic tricks, although in a very unconventional context, while the other, if he can pull it off, sounds like it could be hugely controversial, hugely dangerous and hugely interesting.

The next question asks itself: he seems to be in love with images; he has, in the past, described death as a “beautiful thing”; and he seems addicted to taking risks with his life. Does the last image on his seven-year plan involve his death? I begin asking the question but Blaine senses where it’s going and makes a zipping motion with his hand, indicating that I should shut up. There follows an eerie 30-sec ond silence during which he stares into the distance, smiling to himself.

The interview ends on that haunting note, having been less awkward than I feared. However, the encounter doesn’t end there – for the next half hour Blaine insists on showing me around the flat and insists that I chat to Steiner. He then insists on walking me to the Tube, in the bitter cold, while still dressed in his T-shirt and silk pyjamas.

On the way, as assorted Londoners shout greetings to him (“Hey, Mr B!”), he tells the story of how he grew up in New Jersey, how he began doing magic when he was four, how his mother died after he graduated from high school, how he never knew his father. Every couple of minutes, concerned by the number of people following us, I say he should go back, but he ignores me.

Speaking ever more intensely, he adds that he loathes many aspects of western society, such as junk food (he doesn’t eat it) and television (he doesn’t watch it) and proclaims earnestly how important it is for people to re-connect with the things that really matter in life.

Standing in front of the station entrance I finally manage to persuade him to go back to the warmth of Steiner’s flat. But not before asking him, again, how the seven-year plan will end. Once again he stops me from finishing the question. “Yeah,” he drawls spookily as he drifts off. “Yeah. Seven years. Seven years.”