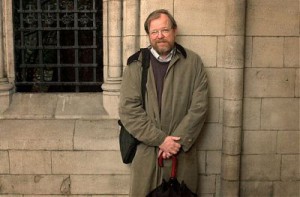 It is another minute before this very English stand-off ends – the 51-year-old writer eventually concedes that Kensington would be good for him (he is spending the day doing some research at a local library), and we make arrangements to meet at the war monument on the High Street.

There’s absolutely no difficulty spotting him on the day: his bushy silver and orange beard, chubby cheeks and beaming smile are instantly recognisable from the sleeve jackets of his very successful travel books. “Glorious day, isn’t it?” he remarks by way of introduction, lowering his umbrella and squinting through the cold, heavy rain.

The comment confirms what I suspected: Bryson may be American by birth, but in every other respect he is as English as a damp mattress in a seaside B&B. He is painfully over-polite. He talks about the weather. And his voice even has a slight English inflexion (he sounds nothing like the brash American actor who did the BBC radio reading of his Notes From a Small Island).

We waddle off to a nearby cafe. He squeezes his tummy behind a table and orders – you’ve guessed it – a full English breakfast. I order one in sympathy and ask the Iowa-born writer, who originally came to England as a young man and worked as a psychiatric nurse and newspaper sub-editor before becoming a full-time writer, if he feels English after spending so much time here. “It’s very strange,” he replies, speaking softly, struggling to be heard above the explosive kkschrrrrplerts of the coffee machine behind us. “I rooted for the English rugby team as much as everyone else – but it was still your rugby team, not mine. I don’t really belong here. I’m an American. I’m an outsider.”

He may regard himself as an outsider, but we have adopted him as one of our own. His books, including The Lost Continent, chronicling his trip in his mother’s Chevy around small town America, and Notes from a Small Island, his account of a tour around Britain, have done very well here. The latter recently topped a poll to discover the book that best represented contemporary Britain, and English Heritage paid him the ultimate compliment this year by appointing him as a commissioner.

Bryson lived for many years in Yorkshire but in 1995 he returned to the US with his English wife and four children, which he likens to “moving back in with your parents again in your forties”. However five months ago he returned to England – to Norfolk. “My wife and I agreed at the outset that we would stay in the US for around five years, but it turned out to be eight because of the practicalities of moving kids in and out of the education system.” And why Norfolk now? “Yeah, I was really uncertain,” he says, misinterpreting the question as a slight against the county. “I spent the first 20 years of my life trying to get away from a flat place and I really wasn’t sure that it was the landscape I wanted to spend the rest of my life looking at.” He looks up as the breakfast arrives. “But my wife decided that it was, and she was right! Ha!”

Bryson smiles a lot – revealing in the process that his teeth are as English as the rest of him – but this, I realise, is the first quip he has made during the interview. While his books are chock full of gags, he himself is not a natural raconteur. He is still very likeable, like the narrator of his books, but likeable in a lovely Winnie the Pooh kind of way, rather than in a witty Stephen Fry kind of way.

He is here, ostensibly, to talk A Short History of Nearly Everything, which he decided to write when he was looking at his son’s textbook’s one night and wondered why science had to be so boring. As he proved with his entertaining histories of the English language, Bryson has a gift for explaining the most difficult subjects in the clearest possible way, and he tackles science with great flair.

The book, which is guaranteed to be a big Christmas seller, is full of fantastic facts such as: if your pillow is six years old, then one-tenth of its weight is made up of old skin, living mites, dead mites and mite dung; your heart pumps the equivalent of four Olympic-sized swimming pools of blood a year; there is enough salt in the sea to bury all the land on the planet to a depth of 150 metres; if you could light up all the asteroids in the night sky larger than 10 metres, you would see a hundred million randomly moving objects, all capable of colliding with the Earth.

However, we end up talking mostly about his next project – or rather, his inability to decide on what he will do next. “It’s a problem,” he says, hacking at a sausage. “You see, I have a very happy home life, yet in order to do what I do, I need to go out and travel. I enjoy travelling very much, but I also love boring stay-at-home routine. I’m always torn between the two.”

The success of A Short History of Nearly Everything should give Bryson the confidence to do another non-travel book – at the moment it seems he could write a book on Finland and everyone would still buy it. Which brings us to the subject of success – something that the English are always coy about. Does Bryson monitor his book sales? “No. You tend to follow how many weeks you’ve been on the bestseller list, how you compare to other people, but I don’t follow actual sales figures. I just can’t keep numbers in my head. Two days ago my publisher told me how many copies of my new book I had sold and I can’t remember. I think it was 400,000.” Wow – that’s a lot. “Yes,” he says sheepishly, “I’m very grateful.”

Does he get recognised in the street? “Not very much. Maybe one or two people a day – it’s the tiniest interruption to your day – no problem at all.” What do people say? “Oh, I enjoyed your last book and so on. At book signings people sometimes bring sweets from their region, or they give me books – books they have enjoyed or often, books they have written on local history.” Oh God, I twitter, imagining piles of books detailing the history of Tipton and Croydon. “No, it’s really nice,” he insists, doing his Winnie the Pooh routine once again. “Really nice.”

But along with the success, inevitably, have come the critical brickbats. Many people love everything Bryson does, but there are also many who find his by-golly, by-gosh, by-crikey style grating. There was a particularly vitriolic piece in The Sunday Telegraph recently, which described Bryson’s prose as “treacly” and “excruciating”, said his insights were “banal”, and accused him of being a “thumping bore” who managed to be both “an inverted snob and an ordinary one”.

“I saw that, it was unusual,” he says, looking hurt as I reel off the quotes. “It was the most extreme piece I’ve read (about me). But it didn’t upset me, or ruin my day. You see it and think, oh, it’s wrong, it’s unfair. Over time you realise that not everybody is going to like you, just as you don’t like everyone you meet.” One of the criticisms often directed at him is that he makes things up – has he ever though about going the whole hog and writing fiction? “The thing that appeals to me about fiction is not having to go anywhere,” he says, insisting that while he exaggerates for comic effect, he doesn’t lie about important facts. “I did write a short story once, when I was a sub on the Bournemouth Evening Echo, but I have no novel inside me.”

Fair enough – the last thing the world needs is another novelist – but doesn’t he now have a serious problem with his non-fiction? His persona, that of a thrifty nonentity, hardly fits now that he is rich and famous. “I have this conversation with my wife all the time. But money doesn’t affect the way I live. My instinct and nature is to be cheap.” A self-conscious giggle, and a glance at his mac and tatty briefcase. “I drive a lot of people crazy – not least my wife, but I have to be like that. If I stay at a hotel and it’s £16 for the kind of breakfast that we are getting for a fiver here, it really bothers me, even if the publisher is paying. And it’s important that it does.”

On cue, the bill for breakfast arrives – it comes to £11, and the FT pays. As we pick up our respective briefcases and umbrellas, I ask Bryson if he has plans to go back to the US at all. He answers that he will visit at least once a year, to see his 88-year-old mother, but otherwise has “no urge” to. Indeed, he seems profoundly out of tune with contemporary America – he rants against the Iraq war, and describes himself as “considerably more left wing than your typical American Republican.”

“I want to go to the continent,” he adds, enthusiastically. “While I was in the US I missed being able to travel for two hours on a plane and being in a completely different culture. It’s exciting.” There’s a twinkle in his eye that makes it hard to believe that his next project will be anything other than a travel book. He’s still got the travel bug, hasn’t he? “I do,” he admits as he opens the cafe door and is blasted with cold English rain. “I still get excited going to places. I still get that buzz when I open the hotel room door.”