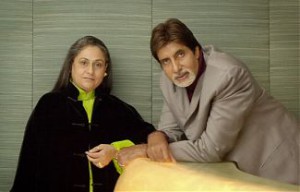 The most famous actor in the world walks into London’s Locanda Locatelli restaurant and not one head turns. Not one diner asks for his autograph and not one member of staff rushes towards him, obsequiously, to make sure he has everything he needs.

Admittedly, staff and regulars at Giorgio Locatelli’s eaterie are not easily star-struck – recent diners include Madonna and Kate Moss – but there is a more straightforward explanation for this indifference: no one recognises him.

Indeed, for most people in the restaurant it’s only the presence of the photographer that suggests that this tall 60-year-old Indian man with unconvincing jet black hair is anything other than an ordinary customer. But Amitabh Bachchan, as any Indian will tell you, is anything but ordinary.

Bachchan’s fame is equivalent to that of Marlon Brando, Robert De Niro and Tom Cruise combined: he is the only Indian actor who has a waxwork in Madame Tussaud’s in London; last year he was presented with the “Star of the Century” award at an Egyptian film festival in Cairo; and in 1999, a BBC poll acclaimed him as the biggest star of the millennium, ahead of Sir Lawrence Olivier, Cary Grant and Charlie Chaplin.

When he makes an appearance in his home country, he invariably gets mobbed. He has a similar effect on fans in the west: he was mobbed by fans in Fremont, California, during a parade a few months ago and there was a near riot in Birmingham in 1998 when he visited the city. Does the scale of the adulation ever freak him out?

It’s hard to work out why he is like this. Maybe he’s bored – he has been meeting British fans for several days, signing endless copies of his new book, To Be or Not to Be, in branches of Selfridges, and is perhaps tired of talking about himself. Maybe he is used to other people making all the conversational effort. Maybe he’s disconcerted by the fact that an Indian is interviewing him for a British newspaper (“To be honest, I was expecting a white to interview me … ”). Or maybe he simply hates the press.

The latter seems a strong possibility. The backlash began in the mid-80s when, following the assassination of Indian prime minister Indira Gandhi, he tried his hand at politics. As a result of his huge popularity, not to mention his close association with the Gandhi family, he was elected to parliament with a huge majority in his home city of Allahabad. But the stint in politics didn’t last long: he was implicated by a newspaper in the Bofors scandal, which involved millions of pounds of kickbacks allegedly being paid to senior politicians, officials and arms agents as a bribe for the import of weapons. He gave up his seat in parliament, vowing to take the publications to court.

“Entering politics was an emotional decision,” he says, adding chilli to his penne. “But I soon realised that emotion has nothing to do with politics.”

The press gloried in another of Bachchan’s high-profile failures in the 90s, when he launched an entertainment company – Amitabh Bachchan Corporation Limited (later renamed AB Corp), which failed to live up to its very ambitious aims.

“I could see that American companies were looking to invest in Indian entertainment and I thought we could do it ourselves instead of letting them walk all over us. We did gain initial mileage and profitability but we failed to manage it the way it should have been managed: we gave too much independence to the managers who were themselves novices.”

“Why would it?” he replies, sounding genuinely mystified, as he settles down at
the table. Well, in October a knife-wielding weirdo was caught trying to enter your house in Bombay; this summer, your crazed fans worshipped a wax dummy of you in Calcutta during a Hindu festival; and when you were involved in an accident on the set of one of your films in 1982, one fan ran backwards for 500 miles in a bizarre pact with God to save your life. Is that not a little disconcerting?

“Well, I just see it as a profession I’ve taken on – it isn’t a very big issue,” he says nonchalantly. “It’s just part of being a celebrity – the day it stops, you should start worrying because you’re losing out on something. If there are passionate people in India, so be it – may they live long.”

Talking of passion, as one of millions of Indians who grew up watching such classic Bachchan movies as Sholay and Coolie, where he invariably plays intense lovers, angry young men or streetwise, lovable rogues, I was expecting to have lunch with a fiery, passionate Amitabh Bachchan. But in the flesh, the Big B, as fans know him, is dry, distant and difficult. At times, the conversation flows as smoothly as the risotto being served to the man on the table next to us.

Why did you become a vegetarian? “No particular reason – it’s just one of those things.” It must be easier being a vegetarian in India than in Britain. “Not particularly.” Are there any ambitions you still have to fulfil? “I’m sure there must be – I don’t know what they are.” Even the task of choosing food doesn’t relieve us from the conversational paralysis. “I know what I want,” he says immediately without opening the menu. “It’s either going to be a penne or a risotto. This is what I normally have at every Italian restaurant – I am quite controlled, I don’t know the other dishes, they all have very complicated names. I get very confused.”

Thankfully for his fans, Bachchan returned to working on screen in 1995. Initially, his comeback films performed badly at the box office, but Rupert Murdoch’s Star TV network asked him to be host of India’s version of Who Wants to Be a Millionaire – “Kaun Banega Crorepati”. The show, on four nights a week, has become a massive hit.

Now, however, Bachchan is tired of the gameshow. “I think KBC is going through viewer fatigue. We are the only country that went non-stop for a year and a half.” Will he return on a long-term contract? “I don’t know – it’s a tough job. TV is very taxing – you can’t make mistakes.”

As dessert arrives – Bachchan again doesn’t look at the menu or listen to the waiter’s recommendations – the discussion turns to the subject of the mafia. In Bollywood, many hit films are rumoured to have been financed by the Indian mob. Has Bachchan ever had any dealings with the mafia? “How would I know?” he snaps. “As a producer, you don’t have ‘I’m a don’ written on your forehead. And I’m not interested. Where you get your money from or who pays you the money is really not of interest to me.”

As he approaches the twilight of his career, Bachchan’s selection of film roles seems to have become alarmingly indiscriminate (“I give every producer a hearing and if it’s physically and humanly possible for me to accommodate myself into their projects, I give them my dates. I wouldn’t call that being indiscriminate.”) and he endorses a depressingly large amount of products, from ICICI Bank to Pepsi and Parker Pens. “It’s helping the bottom line of mycompany, so I do it,” he explains.

Returning to the subject of AB Corp, Bachchan says he is determined to give it another go. “The growth potential of Indian cinema is too big and important to be ignored,” he insists. “But this time, I want to start small – I’ll use the same name, start small and perhaps change the mode of operation by doing lots more joint ventures rather than taking on 100 per cent of the liability.”

But how long can the Big B carry on working? Health problems are taking their toll: on top of his 1982 accident, his left hand once had to be restructured from the wrist up and he suffers from the chronic progressive muscular disease, myasthenia gravis. Bachchan, who exercises in the gym for one and a half hours every morning, admits that life is a battle. “I have to exercise that much because at this age, if you sit for too long, everything gets stiff – you can’t walk, you can’t move, it’s embarrassing. I’ll carry on working as long as my body permits me, and as long as I keep getting offers of work.”

Asked how he would like to be remembered, Bachchan goes completely silent for what seems like 10 minutes before saying that he merely wishes to be remembered as a good person. He then talks about his father, Harishvansh Rai Bachchan, an acclaimed Hindi poet, who is now 94 and very ill. Bachchan recites, beautifully, several verses of his dad’s famous poem ‘Madhushala’, and for the first time during the lunch, it seems that the restaurant is listening in on us.

“It’s difficult for me to compare myself to my father, who is a great writer and will be remembered for centuries,” he concludes. “People will be forgetting me in the next couple of years.”