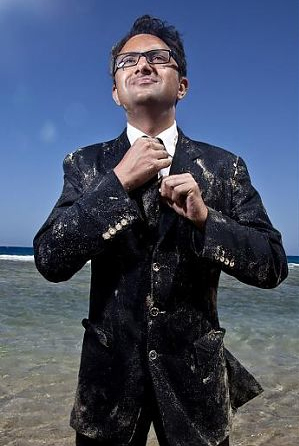 Sathnam Sanghera was born to Punjabi parents in the West Midlands in 1976. He entered the education system unable to speak English but, after attending Wolverhampton Grammar School, graduated from Christ’s College, Cambridge with a first class degree in English Language and Literature.  He has been shortlisted for the Costa Book Awards twice, for his memoir The Boy With The Topknot and his novel Marriage Material, the former being adapted by BBC Drama in 2017 and named Mind Book of the Year in 2009. His third book, Empireland: How Imperialism Has Been Shaped Modern Britain became an instant Sunday Times bestseller on release in 2021, was named Book of the Year (non-fiction: narrative) at the 2022 British Books Awards, and inspired Empire State of Mind, the acclaimed two-part documentary for Channel 4 for which he earned a Best Presenter shortlisting at the 2022 Grierson Awards. He has won numerous awards for his journalism, including Young Journalist of the Year at the British Press Awards in 2002, Media Commentator of the year in the 2015 Comment Awards and the Edgar Wallace Trophy for Writing of the Highest Quality at the 2017 London Press Club Awards.

Before becoming a writer Sanghera (among other things) worked at a burger chain, a hospital laundry, a market research firm, a sewing factory and a literacy project in New York. Between 1998 and 2006 he was at The Financial Times, where he worked (variously) as a news reporter in the UK and the US, specialised in writing about the media industries, worked across the paper as Chief Feature Writer, and wrote an award-winning weekly business column. Sathnam joined The Times as a columnist and feature writer in 2007 and is a regular contributor on national radio and TV, having appeared on programmes including Have I Got News For You and BBC Front Row Late and presented a range of documentaries, including The Massacre That Shook The Empire on Channel 4, which was shortlisted for best Factual TV show at the 2019 Asian Media Awards, and Empire State of Mind, described by The Daily Telegraph as “necessary”, The Mail on Sunday as “riveting and moving”, and The Sun as “personable, funny, measured and… extremely powerful”.

Sathnam’s first book, The Boy With The Topknot: A Memoir of Love, Secrets and Lies in Wolverhampton, was shortlisted for the 2008 Costa Biography Award, the 2009 PEN/Ackerley Prize and named 2009 Mind Book of the Year. It was adapted for BBC2 by Kudos/Parti Productions, was BBC TWO’s highest-rated single drama of the year, featured Bafta-nominated and EEACTA-winning performances, won a Mipcom Diversify TV Excellence Award, was named Best TV Programme at the 2018 Asian Media Awards and Best Single Drama at the RTS Midlands Awards, and was described by The Radio Times as a “smash hit”. His novel, Marriage Material, has been shortlisted for a 2014 South Bank Sky Arts Award and a 2013 Costa Book Award, been longlisted for the 2014 Desmond Elliot Prize, picked by The Sunday Times, The Observer and Metro as one of the novels of 2013, and cited as one of the Guardian Readers’ Books of the Year in 2014. It is being adapted for the stage by award-winning playwright Gurpreet Kaur Bhatti. Amongst other awards, Empireland was named Non-Fiction Book of the Year in Eastern Eye’s 2022 Arts, Culture and Theatre Awards (ACTAs), longlisted for the Baillie Gifford Prize and shortlisted for the RSL Ondaatje and Parliamentary Book Awards. It was also named History Book of the Year by The Independent (“10/10”) and one of the Books of the Year by The Financial Times, The Times, The New Statesman, The Observer, The Daily Express, The Sunday Express and The Week.

Among the other prizes for his journalism, there has been the accolade of Article of the Year in the 2005 Management Today Writing Awards, Newspaper Feature of the Year in the 2005 Workworld Media Awards, and HR Journalist of the Year in the 2006 and 2009 Watson Wyatt Awards for Excellence. He was awarded an honorary degree of Doctor of Letters for services to journalism by The University of Wolverhampton in September 2009 and a President’s Medal by the Royal College of Psychiatrists in 2010. In 2016 he was elected a Fellow of The Royal Society of Literature, was bestowed with the Pride of Pothohar Award in 2018 for his contribution to the Sikh community, while in 2013 writer Jonathan Coe named him one of “The Men of Next 25 years” in GQ Magazine saying that “whether he’s writing autobiography or fiction, Sathnam is busy carving out his own literary niche – in the multicultural British Midlands – which he explores with incredible grace, generosity and humour”.

The Boy With The Topknot, was originally published by Penguin in hardback as If You Don’t Know Me By Now. Marriage Material is published in the USA by Europa Editions, and Empireland is due for US publication in 2022 by Pantheon. He has been a judge for The Wellcome Book Prize and The Costa Book Awards, was formerly a trustee for mental health charity Rethink and chair of media charity Creative Access, and is a patron for Writing West Midlands. He lives in London.